"Fantaisie" was the name given by Elisabeth Friederike Sophie (1732-1780) to her summer residence in Donndorf, five kilometres west of Bayreuth. Here the Bayreuth princess who became the Duchess von Württemberg on her marriage created a refuge that reflected her own personal tastes.

There was already an aristocratic property in Donndorf in the Middle Ages, but there are few records from this time. From the 16th century on, Donndorf was the seat of the Lords of Lüchau, high-ranking officials in the service of the Bayreuth margraves, who built a simple Renaissance palace in an attractive rural setting. On the death of Friedrich Ludwig von Lüchau in 1757, the fief returned to Margrave Friedrich von Brandenburg-Bayreuth (1711-1763). In 1761 the margrave began to build a palace on the plateau above the steep cliff. The north-facing, three-winged complex was probably designed by the Bayreuth court building inspector Rudolf Heinrich Richter (1700-1771). 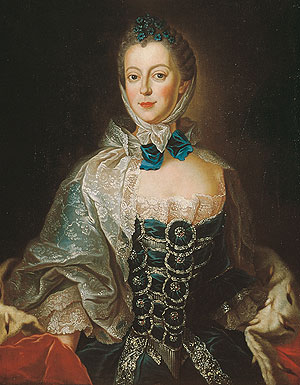 On the death of the margrave, the Donndorf property passed to Friederike Sophie, only daughter of Friedrich and his wife Wilhelmine von Bayreuth, who died in 1758. She began extending the palace for use as a summer residence, and by the end of 1763 had already started on the interior. The most magnificent of the rooms was the marquetry cabinet completed by the Spindler brothers in 1765, one of the finest examples of the Bayreuth rococo style.

The name "Fantaisie" for the palace and garden first appears in records in 1770. At this time Friederike Sophie, supported by her uncle Frederick the Great, had achieved full personal and financial independence from the court. The duchess regularly spent the summer months in Fantaisie with her court, but resided in the Old Palace in Bayreuth in the winter. After her death in 1780 the complex fell into disrepair.

It was not until 1793 that Fantaisie was used again as a summer residence, after it had come into the possession of Duchess Dorothee Sophie von Württemberg (1736-1798), née Princess von Brandenburg-Schwedt, who had fled Montbéliard during the war that was raging in the Rhineland. 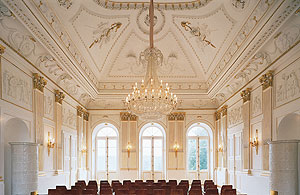 Between 1793 and 1795, Dorothee Sophie had numerous repairs and alterations made. She had the Spindler Cabinet restored and created the White Hall with the elegant stucco-work decoration that has remained to this day.

After Dorothee Sophie returned to the Stuttgart court in 1795, Fantaisie Palace and Park became the summer residence of her son Alexander I von Württemberg (1771-1833). The complex became neglected when the duke entered the service of the Russians in 1806 to take part in the wars against Napoleon.

Fantaisie Palace and Park came into its own once again under Duke Alexander II von Württemberg (1804-1881), a grandson of Dorothee Sophie, who inherited the complex in 1833. In 1850 he embarked on the rebuilding of the palace in its present form. On the garden side the central building and corner projections were each raised by one storey, and two tower-like buildings were added on the court side. The façade was redesigned in the Florentine style of the late Schinkel school.

After the death of Duke Alexander in 1881, the property passed through several hands and was finally acquired in 1929 by Edmund Fürst von Wrede. The palace was upgraded to meet modern standards and the park was reserved for private use. In 1937 the National Socialist federation of teachers installed the "Reich School Donndorf-Bayreuth" in the building, which resulted in the loss of much of the original building substance. 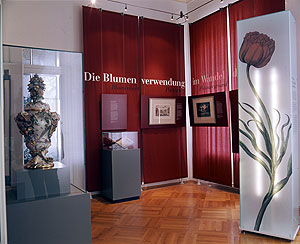 After the palace had been used by the American occupying forces from 1945 to 1948 as a sanatorium and had subsequently again served a variety of purposes, it was acquired in 1961 by the Bavarian Palace Administration.

After comprehensive restoration of the palace under the direction of the Bayreuth building authority from 1994 to 1998, the Fantaisie Palace Garden Museum was opened in summer 2000.

Recommendation in the social media